MONTGOMERY – Alabama Department of Labor Secretary Fitzgerald Washington announced today that Alabama’s preliminary, seasonally adjusted September unemployment rate is 3.0%, a new series low, down from August’s previous record setting rate of 3.1%, and below September 2018’s rate of 3.8%. September’s rate represents 2,194,158 employed persons, a new record high, up 75,426 from September 2018’s count. There were 66,919 unemployed persons counted in September, setting yet another record low, compared to 70,608 in August and 84,568 in September 2018.

“Here we are again, Alabama! Once again, we’re breaking economic records: new low unemployment rate, more people working than ever before, fewer unemployed people than ever before, and the largest labor force we’ve ever seen,” said Governor Kay Ivey.  “While we continue to be proud and amazed at these wonderful numbers, we cannot become complacent and forget our commitment to Alabama – to make sure that everyone who wants a job can have one.  We’re working hard to make that a reality, and we will keep pushing for even more economic opportunities for hardworking Alabamians.”

“The job growth that Alabama is experiencing in 2019 is outstanding,” said Washington.  “Since January, our economy has grown 55,900 jobs – more than double what economists predicted our job growth for the year would be – and we still have three months to account for! We’re outpacing the nation in over-the-year job growth as well, reaching our largest job growth percentage of the year at 2.3%.”

“Not only are we growing jobs, earnings are also increasing,” continued Washington.  “In September, Alabamians’ average weekly earnings reached their second highest level in history.”

All counties and major cities experienced rate drops both over-the-month and over-the-year.  Wilcox County, which is traditionally the county with the highest unemployment rate, saw its rate reach a record low in September at 6.2%. 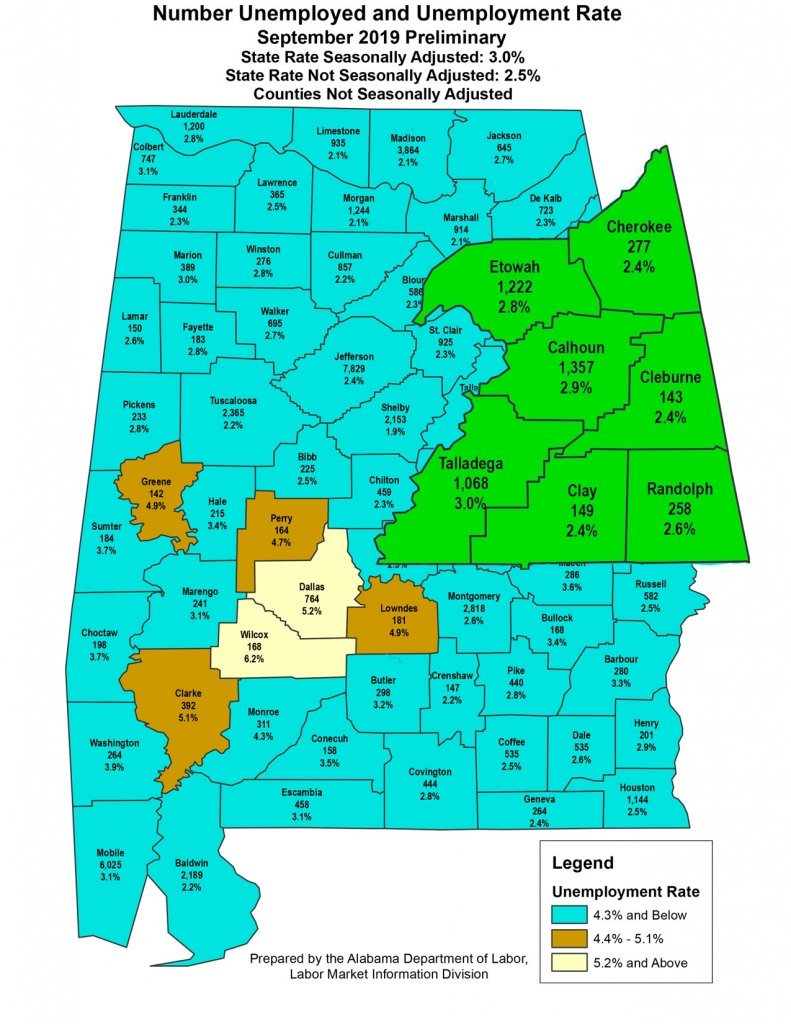